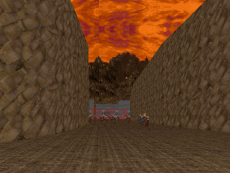 Screenshot of the first level, where you initially find a base.

Licence to Spell Doom is a 9 level wad for ZDoom by The Ultimate DooMer. It will only run with an Ultimate Doom IWAD.

A post-modern adventure with many industrial/tech themes and (as the title suggests) some influence from the famous super-spy. ZDoom features are used heavily, particularly the use of 3D bridge things to create walkways/gantries (complete with steps) and with Transfer_Heights to create 2-story rooms. A crude but effective system is used to control the Quake 2/Half-Life/Sin style ambient sounds, so that they work just like they do in the above games. A Quake 2-style mission setup is also used, together with a few time-based challenges.

The year is 2102, and things have been pretty good of late. After your heroics in the city of Fragport six years ago, and the success of Operation: Lightning three years later, you were recruited into the Special Secret Service (the SSS) and were soon undertaking covert operations into more traditional, non-hellish areas of concern (drug lords, terrorists, criminal organisations etc). Your new call sign is '007' (named after the famous 20th century super-spy, of whom you are now a huge fan) and you certainly aspire to his success rate.

Now, three months after your previous assignment (which was to investigate and eventually shut down a terrorist group trying to open an entryway to Hell in your home city of Sladen) you learn that a large criminal organisation known as MISSILE (Master Implicators of Sinister SWAT and International Level Espionage) have been trying the same thing, but are rumoured to have had more success!

SSS spies were placed in MISSILE's legitimate operations (including research, logistics and renewable power) who reported back that MISSILE had two demons in its research labs, and were developing an enhanced version, which was green-skinned, faster and stronger than its pink cousin. But soon, all contact was lost with the spies, and the leader of MISSILE has recently broadcasted to HQ, threatening to nuke various cities unless a load of money is handed over! So without further ado, it was decided that someone should investigate and shut them down before it's too late!

Which is where you come in. A full military strike is out of the question, so a solo effort is called for. You will be dropped in the mountains near a remote outpost that is the tip of the complex of MISSILE's operations. You will have to travel light, so you will take only your pistol, light armour instead of heavy, and your suit cannot contain all the usual storage spaces that it has. (which means you cannot carry as much as usual)

Once you arrive, you will be on your own, as their hi-tech communications facility will be able to pick up any transmissions. However, the military will be on standby to carry out airstrikes if needed, but only if absolutely necessary. (If you need to destroy anything, you will have to find the means or the necessary ordinance yourself).

And one more thing, you were told about the leader, a criminal mastermind who dresses all in black and calls himself 'The Black Knight' - and if you find him, you are to terminate him with extreme prejudice!

And of course, you were told to come back alive....