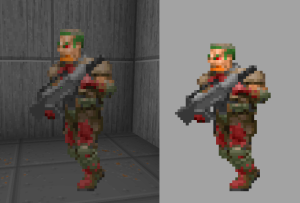 Aspect ratio correction (also referred to as Y-stretching, pixel stretching, vertical stretching or pixelratio) is an effect that results in everything you see in Doom — the world geometry, the HUD and the sprites — to be vertically stretched to 120% of its original size. This effect emulates the fact that vanilla Doom ran at the resolution of 320x200, which has a ratio of 16:10, but was rendered on 4:3 monitors that were common at the time; this resulted in the vertical stretch. All vanilla Doom assets were created with this effect in mind: if you view Doom sprites with SLADE, you may notice that the original images appear vertically squished compared to the way they appear in the game (this is especially noticeable on round objects, such as the invisibility power-up or a Cacodemon. (You can learn more about this effect and see examples on The Doom Wiki).

In short, Doom pixels aren't square (by default). This is something that has to be taken into account when creating custom assets, and there are different ways to handle it, depending on the type of asset. If pixel stretching is ignored, it results in assets that look visibly stretched, different from what the author intended. One common example is things like scoped weapon sprites (or other circular elements), where the scope will appear as an ellipse instead of a circle unless the sprite was initially made with pixel stretching in mind.

Note on the values

Note, you're not actually required to make assets this way, and the actual method of approaching vertical stretching is different depending on the type of asset; this is just a general reminder on how percentages work.

Everything you see on the screen is vertically stretched by default. Taking world geometry as an example, if you create a room 128x128x128 map units, it'll appear as if it's taller than it is wide instead of looking like a proper cube. The same effect applies to actor sprites, which are stretched by default.

This effect can be easily controlled by the author via MAPINFO by using the pixelratio option. The default value is 1.2, which makes the world stretched; using 1.0 will make it square. This option is a simple post-processing effect that applies to the screen, it doesn't actually change any interactions in the game.

However, pixelratio doesn't affect everything you see:

These cases are covered below.

Actor sprites can be scaled separately from the world, by using scale, scaleX and scaleY actor properties. Note, these values are added on top of the viewport scaling defined with pixelratio.

If you're making a project that has its own maps and sprites created specifically for those maps, you can simply define the desired pixelratio and forget about it (pixelratio 1.0 will make sure actors are rendered square, just like the world). For a fully stanalone project (such as a TC or a full game) nowadays there's not much reason to stick to the Doom pixelratio of 1.2.

However, if you're making custom sprites for a mod that is meant to work with vanilla levels or otherwise work with pixelratio 1.2, you'll have to vertically scale the sprites in such a way that they don't actually appear as stretched, since the world will be subject to the default vertical stretching. There are 2 primary ways to do it:

Sprites drawn on the screen by weapons or CustomInventory (which are the only two classes that can draw on the screen) are handled entirely separately from the viewport and are unaffected by pixelratio. The scale properties also don't affect on-screen sprites, since they can only change the appearance of the pickup (i.e. the sprites defined in the Spawn state sequence for that weapon/item).

There are several ways to scale the sprites meant to be drawn on the screen:

Images drawn by the HUD/statusbar (as well as other UI elements, such as menus) are also unaffected by pixelratio and are scaled separately from the world or on-screen sprites drawn by Weapon/CustomInventory. Every UI function has its own arguments for scaling, but talking about HUDs specifically, there are several aspects at play:

If your HUD has elements that look visibly bad when subjected to pixel stretching (such as clearly defined circles or squares), HUD aspect ratio may become a problem for you. Currently there are only 2 ways you can work around it:

Here's an example of how to create a wrapper for the DrawImage() function that will do exactly that:

Once you've done this, you'll simply need to call NoAspectDrawImage instead of the regular DrawImage to draw in your HUD.

3D models are entirely unaffected by pixelratio. Models are not aspect corrected and are instead drawn with proper cubic polygons. The only two values that affect models are the actor's scale property (or Weapon.WeaponScaleX/Weapon.WeaponScaleY if this is an on-screen weapon model), and the Scale of the model in MODELDEF.

If you're creating a mod with models without maps, and you just want to have evenly-sized 3D models, you can normally use them as-is. However, if you want the size of the models to match the world geometry, you need to alter the model's Z scale in MODELDEF to match the current pixelratio value. This may be important if, for example, you're using models as complex elements of decoration (arches, columns, frames, etc.), especially if the models are using the same textures as the world. So, for example, with the default pixelratio 1.2 you need to use Scale 1 1 1.2 in your MODELDEF definitions; with pixelratio of 1.0 you can leave the scale at 1 1 1, and so on.