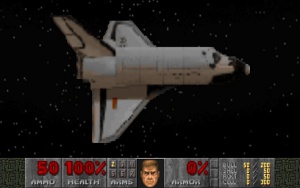 For more information on this article, visit the Assault on Tei Tenga page on the Doom Wiki. 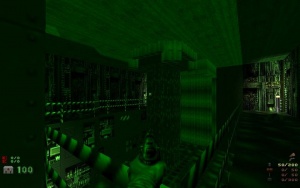 Assault on Tei Tenga is the first recorded instance of a multi-map hub for Doom. It takes advantage of many of the ZDoom features that were prevalent at the time of the mod's original release in 1999. It is "mission-driven", has six maps in the hub, uses new resources, and is loosely based around a story-line. The gameplay deviates from the standard key or switch hunt found in Doom mods of the time. To make progress, you need to vent radiation from a critical area, align the main radio antenna to broadcast a signal, refuel an escape vehicle, and perform many other tasks. The game uses a variety of scripts to create a sense of doing real things in a real place. 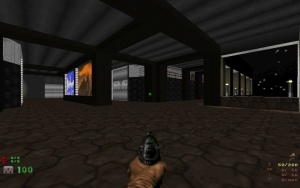 Inside the Space Station.

From the text file: "You're on your way out to some R&R when General Burns diverts your shuttle to Tei Tenga to investigate a loss of communications...." The events surrounding your mission to Tei Tenga are gradually revealed though computer log records that you can access throughout the game.

For its time, the mod was ground-breaking. The WAD was also one of the ten 1999 mods to feature in the Top 100 WADs of All Time on Doomworld.