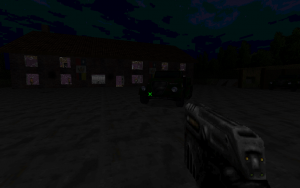 Full use of GZDoom features was made here.

Like NJTRAIN, Operation Overlord and Marine Assault, this project has its roots in Enjay's Aspects TC, which can not be released due to copyrighted material being inside it. However, these projects are releasable as he's been careful to remove that.

This Cacoward winning, 5+ map GZDoom mini TC follows the mission of you, a BGPA soldier, as you fight to liberate the Burghead area of Mons Grampius (named after

an area of Scotland) from the Incanese invaders. You will fight on beaches, in a house, on a rail way, in a bunker and in various other locales, battling with a highly varied arsenal to defeat a rather unique set of opposition, complete the objectives and sieze the day. Many members of the Doom community helped in some way, shape or form, and the sheer volume of work presented here may seem staggering for some. Due to the number of hitscan based enemies, the author does warn that this may seem quite hard at times. All the same, this is highly recommended by most of the community.

It should be noted that due to all of the GZDoom features and the wide open space, it is highly likely that you may find your computer choking a bit in places.