Chex Quest: Galactic Conflict is a 19-map megawad expansion for Chex Quest 3 by Tifosi 92, released on August 21st, 2016 in celebration of Chex Quest's 20th anniversary, after four-and-a-half years in development. The expansion pack features a fourth, nine-level episode set eight years after the conclusion of Chex Quest 3, three hidden levels, multiplayer support, and various changes to the DECORATE code to allow for compatibility of the Chex Quest 3 IWAD with newer versions of ZDoom, GZDoom, and Zandronum.

From the official thread:

After the defeat of the Flemoids at Shreddies Provincial Park and the subsequent development of high-power, large-scale zorcher weaponry, the Intergalactic Federation of Cereals declared the Flemoid threat to be all but non-existent. Any attack on the Cereal Dimension by the Flemoids would require a force too large to quickly transport through inter-dimensional space.

Unless, of course, the attack was already rooted in the Cereal Dimension.

Eight years after cleaning out the Provincial Park, you receive a distress call from an IFoC research base built inside an asteroid in loose orbit around a remote moon, on the border of IFoC territory. It appears that the recent occupation of the asteroid by Cereal peoples has awakened a sinister Flemoidous presence that was already inhabiting the asteroid's caves. The scale of the threat is, so far, undetermined.

Knowing there is no time to waste, you immediately set off for the base. You've beaten the Flemoids before, but your warrior's intuition tells you that this time, things won't be so easy. You face a battle unlike any fought before... and unlike any that will ever be fought after. After eight long years, the Flemoids will be hungry for revenge.

The automated docking bay doors close behind you, and the hangar is pressurized. You give your trusty zorcher one last check, and then climb out of your ship and into the base. Your final mission begins here. 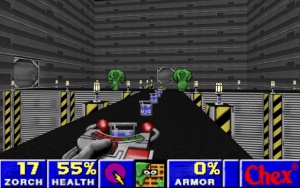 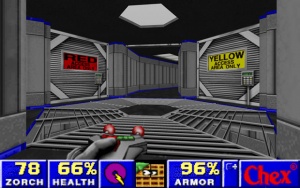 A room oriented over a lattice in E4M2. (Version 1.1 pictured)

The following default behaviors of the Chex Quest 3 IWAD are modified in Chex Quest: Galactic Conflict: