Coils of the Twisted Tale 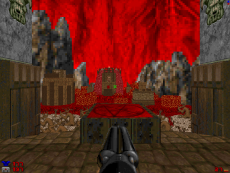 A screenshot of the end of chapter 9

Taking well over three months of time, and roughly one month of time spent actually working on the wad, Quicky2.wad, Coils of the Twisted Tale, barely lives up to the Quicky# ideal. However, each individual section of the map, which in itself represents a small map with its own theme and music, was done quickly. Phobus' seventh release is a map which represents an entire episode of short maps, following a linear progression through the areas, which in themselves range from non-linear areas to straight forward run 'n' gun gameplay.

The map is very progressive, with weapons, monsters and pickups being planned out for an engaging and challenging experience, with various beautiful locales and environments. The gameplay was made using a lot of old ideas from Phobus' unreleased wads, which contribute largely to the oldschool feel and planned fashion of the wads creation.

Suitable for single play, with all difficulty modes implemented. No co-op or deathmatch.

More info and screenshots can be found on Phobus' webpage for Coils of the Twisted Tale, linked below.