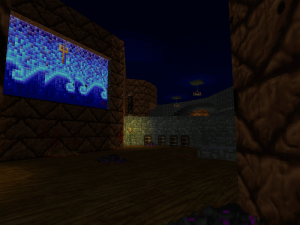 Beyond the green lock.

Dark Deity's Bastion is a single map for Heretic. Like Call of the Apostate, the author's previous work, ZDoom features are used parsimoniously: no scripting besides some HudMessages explaining simple puzzles in riddles, and the up to four clones of D'Sparil at the very end, each wearing a different color. (Note, by the way, that if you play in a high resolution, the author recommends turning on "Scale text in high res" in the message options to make sure the riddles are legible.) The mod features a sky texture borrowed from Hexen and a soundtrack borrowed from

Eternal Doom ("Intermission From Death" as the title music, and the repetitive "DETH Bells" in the level).

The story is bare-bones. Apparently, Corvus is hunting down a dark deity who has sheltered itself in a bastion warded by four gauntlets, of famine, pestilence, war and death. Can our hero defeat the monstrous guardians and smite the evil god? The opposition is comprised of above four hundred monsters in the highest difficulty mode, some of which teleport in from holding cells to repopulate the level after certain player actions. It is often possible to make use of infighting to thin down the hordes with minimal ammo expenditure, which is a good thing as ammunitions are rather tight in the beginning, before the player has explored enough of the map to acquire at least the crossbow, hellstaff and dragon claw. All weapons can be found on the map (though, as always, the mace is not guaranteed to actually be there), and there are also many time bombs. 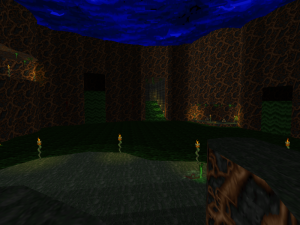 The Gauntlet of Pestilence.

Following the Heretic tradition, the player must acquire the keys in the order Yellow-Green-Blue. The green key allows to access three gauntlets, completely separate areas of the map, with a choice of starting with either Famine (a volcanic area full of weredragons, sabreclaws and fire gargoyles) or Pestilence (a polluted area full of explosive pods, ghost golems and ghost warriors). Once both gauntlets are solved, the Gauntlet of War (flooded with rivers of blood and featuring mostly disciples and ophidians) becomes accessible; which ends with a fight against a horde of enemies of all types led by several maulotaurs. With this gauntlet solved, the blue key can be obtained, and it is revealed that the bastion itself serves as the Gauntlet of Death. The last boss fight is triggered as soon as the player enters the central round structure that is opened then.