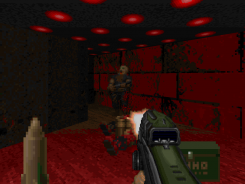 The Doom 3 Weapons Mod is exactly what the title says; it is a weapon mod that recreates the weapons found in Doom 3 for Doom 2, replacing the original weapons. ChaosCentral is the creator of this mod, while DomRem is an assistant with bugfinding.

These are the weapons which can be found in the wad:

There is also a slight possibility that the grenades will be added. Also, any suggestions made at the mod's thread will be considered.

In this mod, there are no default key binds except the flashlight, which is automatically bound to the F key. Instead, you must go to the "Customize Controls" menu and assign the weapons to whatever you wish. As another feature, you can also zoom the view in to make aiming easier, like using a sniper rifle scope.

All sprites were created by the Doom 2.5 team. Thanks also goes to soft_haxorz for greatly improving the flashlight.

Other changes in the wad include the Pistol, Shotgun, and Chaingun Zombies with more health.

The final build has been released with a BFG fix and a new rocket launcher recoil. Also, on 7/11/05 the wad became standalone, so that it can be used in conjuction with any other iwads/pwads you may want to play with the Doom 3 Weapons Mod.

Unless any bugs are reported or ChaosCentral decides to add the grenades/any suggestions, this mod will no longer be updated. If you have any questions or suggestions, post at the mod's thread, located here. Download the Doom 3 Weapons Mod below: