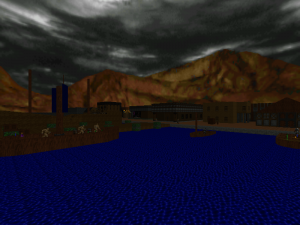 An overview of the docks. 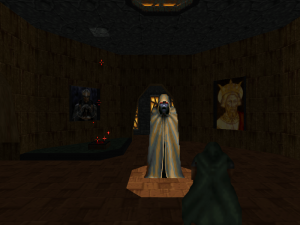 The Oracle tells you what to do.

The Docks is a reinterpretation of Heretic E1M1, designed to feel a bit more like an RPG. The game starts with a briefing sequence, which you unfortunately cannot skip. It is therefore advised to make a save once it ends, so that if you die in the level, you do not have to endure it again. 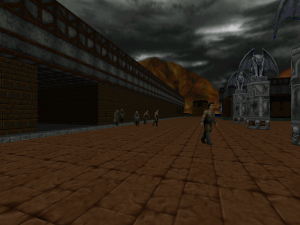 These guys desperately want to stay in front of your crosshairs.

The mod features sprites borrowed from Strife (peasants and beggars mostly, but also the Oracle, who briefs you on your mission) and from other sources, including model rips from Hexen II's archer. A few additional textures have likewise been taken from here or there, resulting in a lack of visual consistency. The peasants and beggars crowding the streets have a tendency to wander aimlessly in drove in the middle of the firefights against entire squads of nitrogolems, undead warriors and archers. If you want to be "roleplay" and avoid civilian casualties, it will be very hard. If you more callously decide to take advantage of these mobile layers of ablative armor, though, they can come in handy. 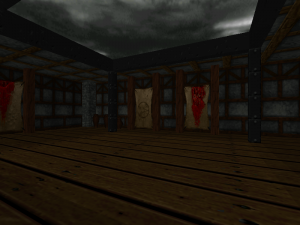 I'm not sure where the blood and organs come from. Those are just tanned skins stretched between posts to dry...

The new enemies are tough: the Hexen II archers have a disproportionate amount of hit points, and the final boss, a death knight from Demon Eclipse, has not been rebalanced to be adapted to Heretic. He spends most of his time with his shield raised, conferring him invulnerability, even during his attack sequences. Speaking about enemies, beware the rabid barnyard animals sold on the market. If you come close to their pen, they will bite. 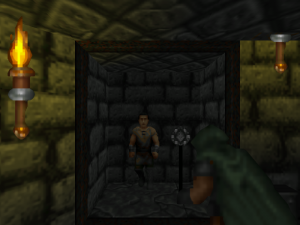 Ammo is tight unless you release a prisoner who will give you a weapon in exchange. (It may not be self-evident that a prisoner would be allowed to keep their weapons with them when they're put in a cage.) This weapon, the "multiwand", is a pea-shooter with infinite ammo, but you can find up to three upgrade gems which allow you to change its mode, giving it three more powerful attacks which do use ammo. Use the alt-fire to change the multiwand's mode.

The level design is overhaul rather flat, though it makes use of slopes to create more convincing roofs to the houses and use teleport lines to good effect in order to have buildings with different floors.

But despite its flaws, The Docks is still worth a try if you are looking for Heretic mods. Although it could have been a lot better, it is still entertaining enough; and provided you learn from its mistakes, it can be a source of inspiration as it does have good ideas, just with a mediocre implementation.