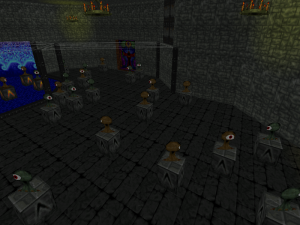 That's a lot of the little critters. 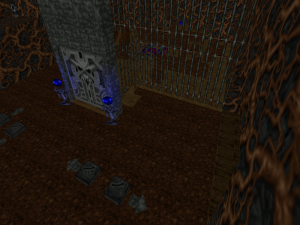 The key is behind the door.

Heretic Puzzle World offers a very different gameplay. There are no monsters to fight, and while there are a few hazards, health regenerates quickly. Instead, there are puzzles. Each of the two levels (in separate files, puzzle.wad and puzzle2.wad) feature a series of puzzles which need to be solved before access to the next puzzle or the level exit can be reached. 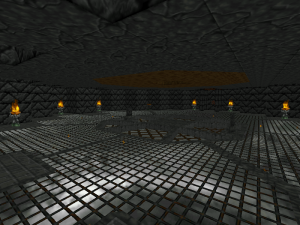 Eyestalks
Little eyeball monsters of two different colors stand on stone blocks in different places. There is a switch which activates a generator throwing red sparks at one of the eyestalks, which responds by shooting another spark out of its eye. The trick is that an eyestalk only responds to the spark from either the generator or an eyestalk of a different color. You can nudge them with your staff to make them face a different angle, and you have to set them in a circuit which will throw the spark at a target.
Remote control
Switches allow to move an item, such as a key or a golem, that is generally in an out-of-reach maze. The aim is to have that item perform an action (such as getting out of the maze so you can grab it) with the remote controls.
Sequences
Magic stones with one, two, three or zero slashes into them, or with various runes. When activated, they either change themselves or a "display" copy in a prominent place. The aim is to guess the proper sequence and obtain it.