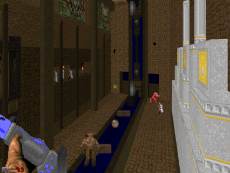 A screenshot of the dimensional gate

Phobus' sixth solo release, this wad is another project made quickly to reduce the monotony of working on other projects which are too big and taking too long. Created in 6 days, this was the first wad Phobus had released since christmas 2006, so he'd been working on community projects or his own projects for over a year with no solo releases.

The wad itself is a feature rich, short map designed to be a quick bit of fun and a showcase for all of the monsters he'd made at the time. There is a secret serious bomb, but otherwise the weaponary is limited to the rocket launcher and a special sword called Justice, which is a holy relic wielded by holy marines. It has a wide, sweeping powerful attack which makes short work of groups of weaker monsters and cuts apart more powerful adversaries quite quickly too. The wad forces the player to think carefully about how he fights.

The story is that the player is a holy marine who is tasked with the job of disabling a Heaven-Hell generator (literally a power source which works by forcing heavens energies and hells energies into eachother) which will power a Dimensional Gate for the demons when it is finished. After that, the player must escape the area, killing all in his way.

More info and screenshots can be found on Phobus' webpage for Justice - Infernal Mechanics, linked below.