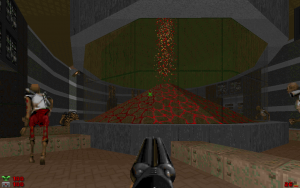 The reactor from within the power plant.

The only map from the KZDoom series to have been made in 2001, this is considered by many to be his best, and is the final map. The map this time starts with a short cutscene showing you your intended method of progressing from the start (perhaps demonstrating the deep water effects used) before putting you back in your own eyes. You then load up on weapons and face up to your challenge - you have to take back a power plant, which is filled with demons, polyobject doors, interesting scenery and highly non-linear, with a few outside areas to boot, including the cave in which you start.

Gameplay is notably tougher than some of the previous maps and overall scale seems to be increased too. It uses the same resources and methods as previous installments, and wraps up the series in a particularly impressive manner. However, this map does not feature the faster shotgun or more aggressive lower-class enemies, unlike the others.