For more information on this article, visit the Mandrill Ass Project page on the Doom Wiki. 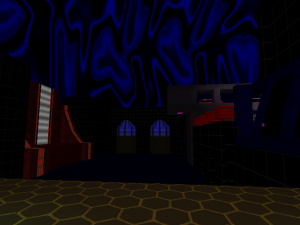 A first view of cyberspace 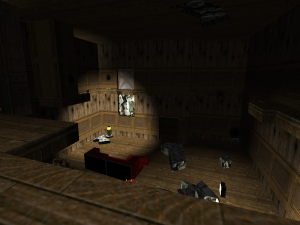 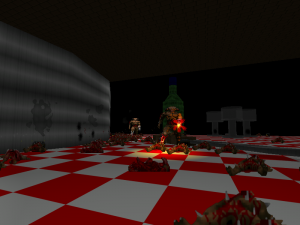 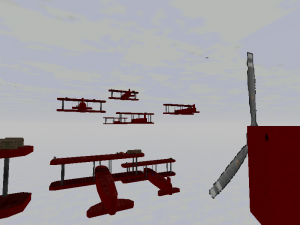 A peculiar approach to aerial combat.

Aluqah's Mandrill Ass Project is a nine-map episode with a strange and humorous storyline. It heavily uses ACS, slopes, 3D floors and dynamic lighting to offer a surreal and constantly changing environment, while keeping mostly close to the core of Doom's gameplay.

The game starts in a lift, where you have to choose in which language the few scripted messages and conversations found in the mod will be written, English or Aluqah's native Spanish; there are a few mistakes and hispanicisms in the English text. The maps are skillfully created and have a generally engaging gameplay, though the next step is not always obvious at first (such as removing the planks on a damaged brick wall in the doomed city, or shooting rockets at the source cube in the Matrix), some of the endurance fights can become more tedious than challenging after a while, and the jumping puzzle maps with instadeath for missed jumps can be quite frustrating if you do not save often.

The story that unfolds evokes a

jokewad, but it is done seriously despite the silliness of the premises: the commander of the UAC marines installed Doom on a supercomputer, and because of a virus, the demons have spread and infested the whole hardware, and started materializing out of it. But the UAC cannot simply turn off the computer because there are important data to recover first (the commander's savegames). Our hero is therefore shrunk to purge the hardware, fighting miniature demons and zombies across a motherboard and jumping on top of condensers, then enter a cyberportal near the harddrive to explore the

Tron-like software world. After recovering the precious saves, the marine returns to the normal world to find it devastated by demons and must find out the source of their materialization by exploring a ruined city. It turns out they come from

Willy Wonka's chocolate factory, apparently using the Wonkavision™ teleporter. Entering it, the marine finds himself back in cyberspace. After defeating a demon posing as the Architect from

The Matrix, the player can destroy the source with a rocket and return to a more normal world. But the demons have made an artifact allowing to infest more computers with the virus, have miniaturized it and hidden it in, of all things, a mandrill's ass; explaining the title. The Marine must surf to a beach resort taken over by demons, use the "reducer", search for the mandrill while being shrunk and facing heavy opposition from tiny demons; and get into the meat of the subject. Things do not happen as expected since the ape is drugged with LSD, sending the marine into an acid trip; at the end of which he sees an imp teleporting out of here with the artifact. Following it, the hero learns that the surviving demons have escaped to the local Museum of Aviation and took flight on a small fleet of biplanes. It is the player's duty to chase them on his own plane, and to get to the flight leader by jumping from plane to plane to retrieve the artifact. As he does so, however, the plane, unpiloted, crashes into Heavens' Pearly Gates. To get back to Earth, the marine will have to fight God himself (or as it turns out, an impostor or usurper).