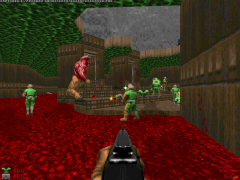 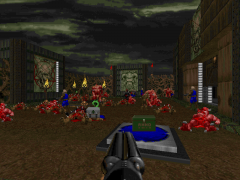 Marine Express was released on August 07, 2006 as an answer to the ZCajun bots' relative uselessness in cooperative games. Marine Express marines are technically not bots, but friendly DECORATE monsters.

There are issues if you are trying to run this wad under Skulltag as it may start acting up with invalid parameters and unknown decorate commands that have not been supported yet by SkullTag.

The Skulltag Expansion Pack was announced on April 17, 2008 and was released on April 21, 2008. This expansion pack includes four extra marines compatible with Skulltag only. It utilizes the Skulltag weapons and gives these new marines those weapons for an extra variety of cooperative bots. The final editing of this expansion pack was suppose to be short with no new features added, however, due to the nature of skulltag not recognizing various sound effects, the expansion has sound files added.

Marine Zeta is the sequel to the first release of Marine Express. Was suppose to be release in May 2008, but due various other work-arounds the project was held until the end of July. The project was officially released on July 25, 2008; however, it is available to other players via Doom Connector for the Special Edition which was limited before the final released date.

Marine Zeta gives out new feeling compared to the old-fashioned Marine Express. It makes the new decorate marines act as actual bots. Spawning at their same location or at the location of first appearance, the player can choose which bots to spawn, what color to spawn, and where to spawn it at.

There have been sighting of future releases revealing script that will allow the player to control the marines with various commands. It was said it will be based on Doom 3's Tinman Squad Mod in the same way. However, due to complications in multiplayer, this may not work. No further information has been released as of yet.