For more information on this article, visit the Megaman 8-bit Deathmatch page on the Doom Wiki. 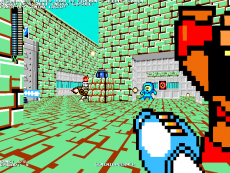 Mega Man 8-bit Deathmatch is a new multiplayer mod, originally created for Skulltag before being moved to Zandronum, that aims to bring the best thing about Mega Man's 8-bit adventures to Doom. Everything will play as if it was being played back in 1987 but from a 3d perspective. Levels will use purely 8-bit textures and sprites. Mega Man will jump high and take damage recoil. Weapons will behave exactly as they did back then, only from a 3d perspective (with a few exceptions. The plan is to eventually have all the levels and weapons from Mega Man 1-6, and if successful expand up to the 8-bit versions of Mega Man 7 - 10 in the future.

The game can be played in pretty much any game mode in Skulltag (CTF etc is planned for later), but will be designed for Deathmatch. To keep the gameplay balanced and simple, you will have to find them and pick them up like in standard Doom fashion. Along with the huge amount of weapons, there are special inventory items which can be used at any time, such as the Rush Coil and E-Tank. The game will also include a huge amount of player skins, featuring every Robot Master from Mega Man 1-6 and more.

A release date has been set for 2010. A very small demo version has been planned to be shown at ScrewAttack's SGC gaming event.