For more information on this article, visit the Quake Champions: Doom Edition page on the Doom Wiki. 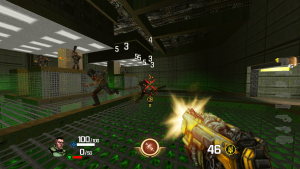 Quake Champions featuring custom classes, weapons and monsters. It is designed for Zandronum 3.0 and compatible with GZDoom from 1.8.6 to 4.3.3 and Delta Touch. QC:DE boasts balanced gameplay across the single player, numerous PvP and cooperative game modes. It was granted the Multiplayer award at the 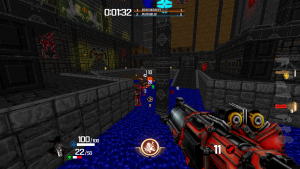 Player as Caleb shoots a rocket into a group of players highlighted with red outlines. Map is QCDE36: Fusillade by DBThanatos, a demake of eponymous map from

Unofficial maps have also been made by mod's community, such as RoosTer's Invasion mapset.

All champions have health/armor caps (stack). There are three types of champions:

The stacks are “lower” compared to Doom, and light champions seem rather fragile, since they have low caps for health and armor. However, this is countered by their abilities. Light champions have ways of healing or escaping dangerous situations -- as opposed to tanks, whose abilities are more about dealing with danger face to face.

The fact that stacks are relatively low overall is compensated by healing items giving much more health than traditional Doom pickups, and armor being much more common. Therefore, it's possible to lose health quickly, but so long as an escape route is available, lost health can be gained back in a heartbeat. 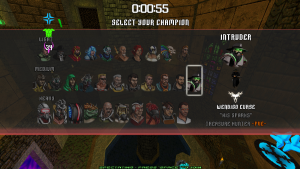 Abilities define the play style of the characters. For example, Kane, being inherently fast, has even greater speed while crouch-sliding, which allows both to deliver firepower right into the enemy's lair and retreat, possibly using Stroyent Injection which instantly restores his health in case his plan goes awry. As the opposite example, Terminator hardly ever retreats, and his ability to passively restore ammo, as well as freely triggered rocket barrage, ensure that he can deal with any threat without slowing the pace.

Some ability effects differ slightly between PvE (single player, cooperative, etc) and PvP (multiplayer deathmatch and the likes). Usually, PvE abilities have a stronger, more pronounced effect, and a fittingly longer cooldown time between uses. This increases the value of "time shards"—the hourglass-shaped bonuses that reduce cooldown by 10%.

31 playable classes are present, each with a unique active ability and one or two unique passive abilities:

In GZDoom, player pawn size is always set to standard, so players don't have to worry about hitboxes.

For single player in older source ports, only “Medium” champions are recommended. Light characters are very small and can sometimes fit between the bars where players aren’t supposed to fit. Conversely, tanks are considerably bigger and won't fit in the tightest of places where player might be expected to go. It's still possible to play any class, but if map progression is broken, the responsibility is on player.

Regarding difficulty, playing single player or cooperative with Medium champions is playing QCDE in “normal” mode. Playing with Light champions is more of a challenge, and playing with Heavy ones is a bit on the easier side because of their stacks.

Monster randomization has two modes: classic, as known by the likes of Aeons of Death and other randomizer mods, and theme per map, selecting only one of the enabled themes at random for each map. 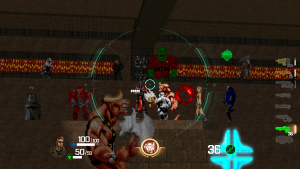 QC:DE features an ACS-based API that allows third-party monster themes to be cleanly interfaced with the mod. As a result, over 40 monster sets have been developed by the community members, mainly porting monsters from other popular games into QCDE. Each monster set can be played exclusively, replacing all monsters, or in combination with other monster sets, built-in or third-party.

Several monster theme addons have been released officially by the mod's team, including Heretic, Marathon and Doom 3 monsters. A tutorial for making monsters compatible with QCDE is available on ModDB, as well as a template theme file to plug values into.

During single player or cooperative games, killing all monsters and finding all secrets on a map is rewarded with a random tiered bonus, represented by a lootbox. Like in Quake Champions, there are three reward tiers on this surprise mechanic: Backpack, Chest and Reliquary. Lootboxes reward player for map knowledge and perseverance during secret hunting.

Backpacks contain rewards that are immediately useful, such as a random weapon, an ammo refill, or a megahealth. Chests contain more significant rewards, such as a strong powerup to be given on the next map, or sometimes, even two. Reliquaries, the most prized lootboxes, contain permanent improvements such as max health or max ammo increase.

In multiplayer games, every player gets their own lootbox once all monsters have been killed and all secrets found. It is therefore especially beneficial to party as a whole to complete the map perfectly.

It's worth noting that at no point do surprise mechanics of this mod ever cross ways with real world money. The lootboxes of QCDE are completely free. 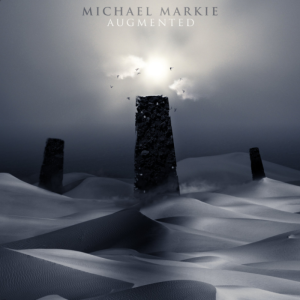 Soundtrack consists of the album Augmented of original metal music by Michael Markie and covers of songs from Doom, Duke Nukem, Blood, Wolfenstein 3D, Quake 1 and 2.

Excerpts have been featured as outro music for released videos, and as background music for Kane deathmatch video.

Owing to its Quake roots, Quake Champions: Doom Edition has developed a competitive scene. Several duel tournaments with monetary prizes have been held. The most successful series, TastyCups, has seen 7 tournaments to date, the latest one in May 2020. TastyCups are organized and casted by Alex "Jehar" Popa, known for also casting Quake Champions tournaments.