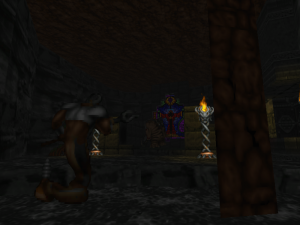 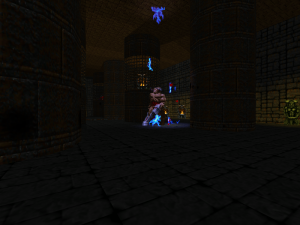 Resurrection of Chaos (actually entitled Ressurection of Chaos [sic]) is a seven-map hub for Hexen. The maps themselves have been taken from other projects, the first from an unreleased project by Vermil which in turn is derived from the Doom II map "Dead Simple", the others from different Heretic or Hexen maps by various authors, such as Fortress of D'Sparil. 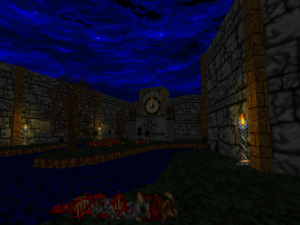 The end is near.

The hub is a Hexen sequel to Hordes of Chaos. Like its Heretic predecessor, the maps use ZDoom features to import monsters from other games, though surprisingly more from Doom than from Heretic. Another thematic oddity is the presence of tech demons, namely the mancubus and the cyberdemon, which had been avoided in HoC. But the mod also features some new monsters, namely a new chaos serpent variant, giant boss versions of the ettin, afrit, stalker and bishop, and Omega Korax as the final boss. In addition to imported monsters, the mod also features imported weapons: the ethereal crossbow for the cleric, the firemace for the fighter, and the dragon claw for the mage.

The first map serves as the hub from which four other maps can be reached in any order, but only once each. When one of these four maps is completed and its giant boss defeated, you return to the hub map, were you hear the portal to the finished map close. Once all four maps are completed, access is granted to the penultimate map, which features the most intense slaughterfest gameplay of the mod. From this map, after solving a pointless clock puzzle, you reach the final map and its epic and innovative boss fight.

Overall, the mod is much easier than Hordes of Chaos thanks to Hexen's more generous inventory size (25 items instead of 16) and the hub system letting you keep all items from a map to the next, instead of just one of each. Furthermore, ACS is used to increase ammo capacity from Hexen's normal 200 to 400. You are given all weapons except your class's ultimate weapon right in the first level, and the ultimate weapon just before reaching the sixth level. Although this is contradictory with the principle of a hub, all levels are completable "from scratch".