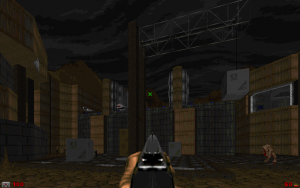 A crane made entirely of mid textures.

Released about 5 years after its prequels, this map lets you relive the final battle of the player from the previous Sin City wads. This map makes use of new textures, music, sounds and a lot of ZDoom features, but unlike Sin City 2, the cutscene is shorter and the map a bit longer, bringing the overall gameplay experience back to as it was. Highly atmospheric as far as the story and texturing is concerned, the gun play is still a similar style to the original, but as the level is a bit bigger, the monster count is notably higher.