On Windows systems, ZDoom supports three games that had special graphical startups. Contrarily to other graphics, the image formats used here are hardcoded and cannot be replaced by alternatives.

The -nostartup command line parameter forces ZDoom to use the text-mode startup log from Doom.

The GAMEINFO lump can be used to override the game default, provided the needed lumps are successfully used. 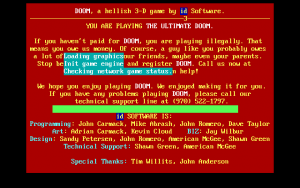 Heretic displays a 80x25 ANSI text screen called LOADING. It is altered by the executable as such:

Hexen uses a lump called STARTUP to show a 4-bit, 16-color, 640×480 picture on the startup screen. It is stored in a custom, non-standard format: the first 48 bytes are for the 16 color palette (three bytes per color entry), followed by raw 4-bit planar graphics. The total size is therefore 153648 bytes exactly. The music lump "ORB" is played during loading.

The notches can be replaced by raw 4-bit bitmaps. The loading notch is 16×23 (184 bytes) and called NOTCH and the netgame waiting notch is 4×16 (32) and called NETNOTCH. They use the palette defined in STARTUP.

SLADE3 and HexStartup++ are the only image editing tools currently available that can convert pictures to these formats and create replacement graphics for them.

Note: in vanilla Hexen, the net notches are technically 8×16, however they are hardcoded in the engine and cannot be redefined.

Note 2: As of GZDoom v4.8.0, the custom file formats used for the Hexen startup are no longer necessary, and you can use any other GZDoom-supported texture format, such as PNG, so long as it remains the proper resolution.

All these are in raw format and use the PLAYPAL palette.

Note: As of GZDoom v4.8.0, the specific file formats used for the Hexen startup are no longer necessary, and you can use any other GZDoom-supported texture format, such as PNG, so long as it remains the proper resolutions.