Stronghold: On the Edge of Chaos

For more information on this article, visit the Stronghold: On the Edge of Chaos page on the Doom Wiki. 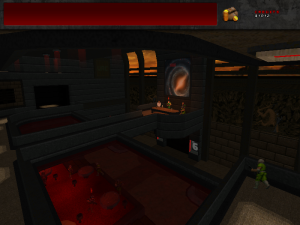 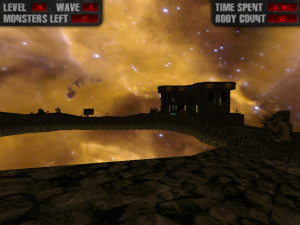 A stronghold on a Maelstrom asteroid.

Stronghold: On the Egde of Chaos is a massive mod, created by a team gathered by Tormentor667. It requires GZDoom or Zandronum to run and supports both singleplayer and multiplayer. There were two release candidate versions in August 15 and October 15 respectively, and the final release was published on November 8, 2010.

Stronghold features more than 35 maps to defend against invading legions of hellions. Each stronghold has its own vulnerability (usually, a "deadline" or teleportation field which the enemies will try to cross) and must be protected adequately against the demons' depredations. To help you, since you are alone against the horde, you can buy equipment in the main base in between two missions. Funds are awarded to you for successful defense, and each killed foe carries a bounty. You can obtain boosts to your maximum health and armor rating, as well as a variety of powerups, including obstacles and sentry guns that you can place strategically to help you complete your mission.

The inventory also features resprited weapons, originally created by Eriance for Demon Eclipse, as well as new weapons such as a "stunner" rifle which briefly paralyzes demons, or proximity mines which can be laid to fortify a passageway against the first waves of interlopers.

The maps make full use of OpenGL features and incorporate non-paletted textures, 3D floors and dynamic lights in their design. Several classic ZDoom monsters are included in the enemy roster, which you can learn about in the main base's demon database.

Gameplay enhancers and fixes also exist for this mod and Zandronum servers hosting Stronghold tend to include them.