The City of The Damned - Apocalypse 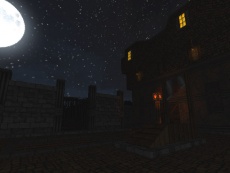 Entrance area to the City

The City of The Damned - Apocalypse is a large map created by Tormentor667 and is the sequel to the similarly named The City of The Damned. Like its predecessor, It uses many Blood resources, including textures, weapons, and monsters from the game. ACS scripting is also used somewhat heavily to produce several puzzles and a significant storyline. A neat element to the story is added to the gameplay where a siren periodically goes off and you are forced to dash for specially marked cellars. If you can't make it to the shelter in time, spirits come to kill you. This, along with eerie music and a tense atmosphere creates a terrifying and memorable experience.

TCoTD - Apocalypse was praised for its extreme attention to detail and dark creepy atmosphere. It was criticized however for the gameplay. Many found it too hard or frustrating due to the amount of keys you had to find, lack of ammunition/health and tough monsters. Some of the puzzles while unique were confusing for some players. Overall TCoTD - Apocalypse received mixed comments and reviews.