For more information on this article, visit the The ZDoom Community Map Project "Take 2" page on the Doom Wiki. 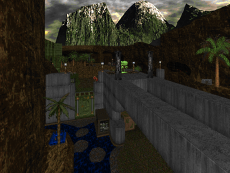 A screenshot of an outdoor area in ZDCMP2

The ZDoom Community Map Project "Take 2" (or ZDCMP2), is the sequel to the original ZDCMP. Like its predecessor, the community project takes full advantage of ZDoom features, showcasing 3D floors, named scripts, stacked sectors, UDMF extensions, a couple voxels, and a positively gargantuan size. The map provides a very non-linear playthrough that can last several hours, dozens of secrets and even more unmarked Easter-eggs, a "New Game +" mode allowing to play it again with your accumulated arsenal against stronger enemies.

ZDCMP Take II is actually Take III, as the original "Take II" was never completed. Started soon after the release of the original, it suffered a six month hiatus from December 2004 to June 2005, all progress on it being completely halted. Seemingly dead, the project was finally resurrected "like a phoenix from the ashes" by Talonos and Kirby on June 25, 2005, before eventually dying again.

In 2012, Tormentor restarted the ZDCMP2 from scratch, settling on an "overgrown jungle techbase" theme. Using the Universal Doom Map Format instead of the Hexen format was decided after a quick debate. Public progress officially began on the first of April, for the first phase where each contributor had a limited time to add on some areas and a "signature mark". The map grew quickly during that phase, which ended on May 24. It was followed by a second phase working on the same principle, each contributor having a limited time to work, but this time the focus was on improving and detailing the existing areas instead of adding more. The third phase followed in kind, starting on June 29, with a focus this time on both aesthetics and gameplay. The fourth phase was for finalizing, tweaks, gameplay, and balance, and was originally meant to keep the same formula and end on August 29; however as more and more issues were raised, the slot system was eventually abandoned, allowing contributors to keep working on it until they deemed their work finished. This brought in short delays and long hiatuses as the person currently holding the file could fall victim to other obligations or burnout. However, the project nonetheless kept on moving forward, with a first release candidate announced on January 19, 2013, and a second on December 9, 2013.

This second RC received this year's "Mordeth Award" (reflecting on its own delays as well as the original attempt from 2004) and one of the ten normal Cacowards during the annual Doomworld award ceremony. It was also mentioned by Game Front as one of the best "partial conversions" available for Doom, along with Cold as Hell, Winter's Fury, Reelism, and The Ultimate Torment and Torture.