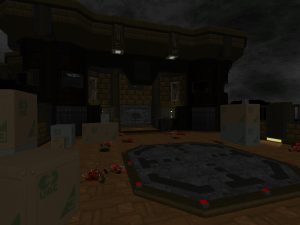 You've been dropped on this helipad. You must now enter the power station. 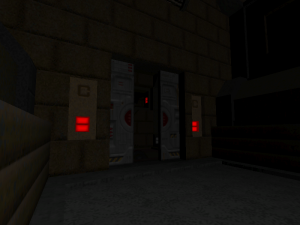 "Emergency power only" so the lights are off. A power outage in a power plant?

Thunderpeak is a two-level mapset extracted from ZPack - Random Maps for ZDoom. The first level is a massive power station, heavily infested, which you must restore to working order so as to access the rest of the facility. The reactor core is well guarded by some of Hell's mightiest technodemons. The second level makes you cross a damaged bridge to reach a bunker. Deep underground, you will fight the commander of this demonic taskforce, a walking death machine that can easily terminate you if you are not very, very careful.

The Thunderpeak complex sits on both sides of a deep valley and can apparently only be reached with a helicopter or other VTOL aircraft. The raging thunderstorm outside is echoed by the sheer might of the electricity generators inside, providing a symmetry between the natural and the technological — both being dark, omnipresent, and ominous. The power plant seems to exist only to power the command bunker and the rest of the facility, probably one of UAC's top-secret military research center or a space marine HQ. 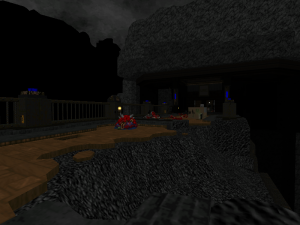 This bridge has known better days.

Thunderpeak makes good use of ZDoom features to create a majestic, if sinister and oppressive, location. The power plant and the command bunkers are painstakingly detailed, with great attention to texture choice and alignment, interesting architecture, engaging gameplay and stunning visuals. The natural landscape areas around the buildings show a perfect mastery of slopes. The enemy roster features some classic ZDoom monsters such as the shadows from Knee-Deep in ZDoom or the cybruisers from Demon Eclipse, and introduces its own new enemy as the final boss. 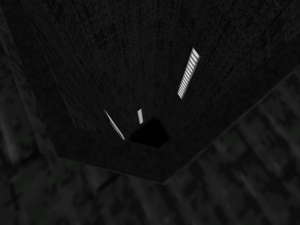 You have to go down that rabbit hole...