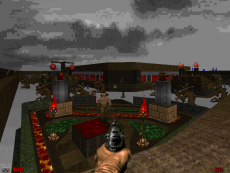 A winter wonderland, to be sure.

For a brief period Phobus was present on doomworld forums, where he signed up for Community Chest 3 (which was released successfully to great critical acclaim) and the 2006 Doom Advent Calander (which fell through with only two or three maps actually completed). Twisted Joke was his entry for the DAC, and became his fifth solo release. It uses graphics and music from xmas doom, a very old Christmas wad for Doom2, made by Joe (SillySft), Mal, FireHawk, Lithium, ChainsawJim.

The map itself is a Christmas themed, unserious map which is based around a mix of gameplay and Christmas ideas. There's a main area, with an expanding area of play, a ski slope made using slopes with low friction, a large arena based around a very bare Christmas tree (the presents aren't too nice though) and a dungeon sort of area which has little to do with Christmas, but features some straightforward, doom-esque gameplay. The level works like a small hub, with keys being collected from the three separate areas to allow access to the exit in the main area.

Suitable for single play and up to 4 player co-op, though the /idgames version doesn't have the co-op compatibility. No difficulty modes featured.

More info and another screenshot can be found on Phobus' webpage for Twisted Joke, linked below.