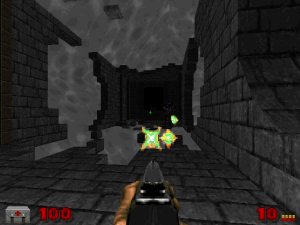 The player under attack from Dark Bishops, one of several Hexen monsters featured in Void.

Void has a unique setting mostly influenced by

American McGee's Alice. It is notable for being the first ZDoom map to make use of ZDoom's at the time new texture system which allowed wall textures, flats, and sprites to be used on any surface. Several enemies from Hexen make an appearance; alongside two new monsters, spiders and dark imps. The wad also features The Unmaker, a weapon from The Doom Bible, made using Heretic's Phoenix Rod. The fist is replaced with Hexen's gauntlet, given Doomguy's fist graphics.

The map is also noteworthy for its "offbeat" and sometimes difficult gameplay, including many difficult jumping puzzles. Some other things not normally seen in Doom levels include one area which the player must shrink himself, a sector-based puzzle, various traps, and erratic boss fights. Due to the difficulty, saving often in this map is recommended.

The title music is It's Night Forever by DipA, and the music for the map itself is Exquisite by TSEC. Both are in the wad as compressed XM modules, and the original versions can be found on The Mod Archive.

The UAC is performing gateway experiments again. They accidentally teleport a Cyberdemon into the lab, but before the Cyberdemon can kill the player and a scientist at the console, the entire scene is frozen by the Heresiarch. It then proceeds to send all of the marines (both dead and alive) and the Cyberdemon into a mysterious and rather surreal dimension, which the player must fight his way out of.

Void is one of the most well known ZDoom WADs out there. The unique use of ZDoom features and surreal environment made it stand out as one of the best WADs to date. Today it holds more than 150+ votes on Doomworld's idgames at a 4.5 star rating and has received numerous of mentions and reviews around the world wide web. Many people on the ZDoom forums agree that it is one of the best out there.