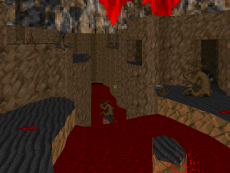 The valley from Warpzone, showing a blood red river. (no monsters)

Phobus' third release, this gigantic map was originally the secret level for Scourge, but once it was pointed out to him by multiple people that it required work and didn't fit in with the rest of the wad at all, he removed it, but continued to work on it as its own project.

With a play time of roughly 1 hour and over 1100 monsters on Ultra Violence, the map is one of the larger maps available. It is split into 4 different themed sections, linked by a central teleporter hub. The heavy detailing and large number of monsters does mean that framerates may be quite low on some machines.

The player(s) are tasked with a mission - to eradicate all hostile life in the teleporter-experiments-gone-wrong ravaged tech bases, chunk of hell, star port and lump of landscape. The story is that the teleporters managed to warp space-time so violently as to drag four landmasses from their respective locations and float them over a specific area of the planet (Abbottoir, first featured as the alien planet in Scourge). A short range, safe teleport was dropped into the area and used to allow marines, scientists and other personnel access to this phenomenom, but the masses of demons made setting foot on the teleporters suicide. Eventually the area was mapped out sufficiently for an Extreme Marine (the player) to be despatched to the teleport hub. Operation Warpzone is ahead of them, and with it a serious challenge.

Gameplay is a mix of Doom 2 style gameplay, slaughter map gameplay and an over-arcing, somewhat HeXen-esque switch hunt, though not quite as complex. Indication of which teleporters to go through is given, and at the end of it all a boss monster is waiting.

Suitable for single play, but co-op starts are included for up to 4 players.

More info and more screenshots can be found on Phobus' webpage for Warpzone, linked below.