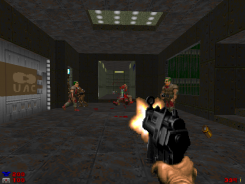 Fighting zombies with the sub-machinegun.

Xim's Nuke-Um Weapons is a weapons mod, inspired by the Duke Nukem Weapons, but the featured weapons are not exactly like those in Duke Nukem 3D. This requires the latest SVN of (G)ZDoom. It has mostly just tested it with GZDoom, so it is the recommended engine to use.

1 - The Boot: Now the Doom guy kicks too! (Unless otherwise stated, alt-fire kicks for all other weapons)

2 - Desert Eagle: Stronger then the old pistol, but you have to reload it after nine shots. It has a Nuke logo on it.

5 - Grenade Launcher: Similar to the one in my previous weapons mod, but alt-fire changes the ammo type.

6 - Freeze/Heat Blaster: A plasmarifle that shoots freezing or heating blasts, has some cool effects sometimes...

7 - Needler: A chaingun like weapon that shoots needles. Comes in two flavours, expanding and explosive!

0 - Remote Bombs: Similar to the pipe bombs from Duke 3D, but they look different...