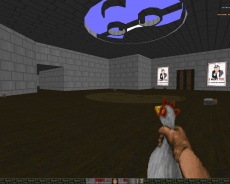 A screenshot of MAP03 in ZCTC.

Zdoom Catch the Chicken (ZCTC) is a ZDoom multiplayer modification similar to Skulltag's CTF. It was developed by Cutman and HotWax.

The rules of ZCTC are simple. After the players start, a chicken will appear in the map. Once the chicken has appeared, it is the player's job to locate and "catch" the chicken by running over it. Once you have picked up the chicken, you start scoring points. The idea is to hold on to the chicken for as long as you can, until you reach the score limit and you win the game.

After the player with the chicken dies, he stops gaining points and he drops the chicken, ready for the next player (or the same player if he finds it first) to catch and score points.

ZCTC was planned to have more maps, features and more but due to lack of interest it ended on v4.1, which is the most stable (and sane) version of the wad.

Thanks to the new features in ZDoom, ZCTC will run on any map as long as certain script numbers and tags aren't used (these will likley change later).

You should be wary of maps with damaging pits where the player cannot escape, because if he/she gets stuck down there with the chicken, the chicken will be unable to leave that area and the game will soon become a struggle to stay alive in the pit.

If the chicken gets lost somehow to a bug, HotWax's ChickenSaver(TM) will activate and the chicken will respawn in the map.