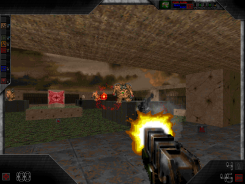 ZEROT's protagonist, the Prototype, features both a deadly arsenal and a snazzy new Heads-up Display. 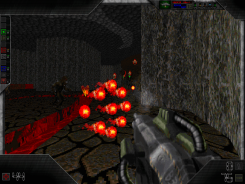 Tear away at enhanced demons using monster machine guns, face-melting fusion cannons, and much, much more!

After many months of work and even more months of delay, Zero Prophet's debut, 'Zero Tolerance, smashes into the ZDoom scene with surprising force. Aimed at being not just a weapon mod but a full-blown gameplay enhancement, Zero Tolerance puts the player in the role of the Prototype, an enhanced killing-machine in a world gone wrong. Bring forth a deadly arsenal of sci-fi weaponry including flak guns, photon pistols, cluster bombs, bouncing plasma, and much, much more than one can shake a BFG at.

Additionally, the mod sports a deadly cast of new enemies and enhanced, familiar foes. Blow 'em to shreds and be amazed at Nash's gruesomely-satisfying enhanced gore effects as enemies literally fly apart in a sea of red. Keep track of your status with the Prototype's signature Heads-up display, and give those baddies the beating they deserve!

As a 'bonus feature', the mod also includes a well-written backstory, set in the timeframe of the events of the original Doom. Experience the "first invasion" through the eyes of a failed government experiment unwillingly thrust into mankind's greatest catastrophe.

Zero Tolerance is a blast to play both alone and in co-op. Grab a friend and blow the opposition to shreds with double the firepower! Compatible with a huge variety of wads and recommended for both team and solo ventures, Zero Prophet has crafted a simply unforgettable Doom experience.

What are you waiting for? Download Zero Tolerance now and give those demons a taste of their own fury!