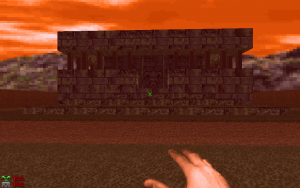 The outside area of Zort02.

Finished on April 1st, 1999, only a few days after the previous Zort map, this time around we're presented with a green castle structure for the most part, with some brown areas for variation. As you'd expect, this follows much the same style as the first, with slightly more subtle use of ZDoom features. Perhaps the most notable feature is the Cyberdemon trap, which places you in very close quarters with the monster, making your survival rather luck based.

Music is by Dave Shaw (author isn't too certain on that one), and the sky is by Ola Bjorling.

The level progression can be easily broken by jumping out of a window, which is acknowledged as a bug (unlike in the previous Zort, where jumping was necessary).