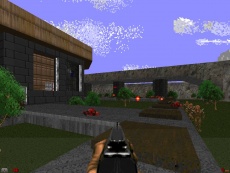 A screenshot from MAP05. The arch in the distance is made of ROCK6, an extremely strong gray material that is the foundation of Crapi's outdoor areas.

Crapi is an experimental multi-level PWAD developed for ZDoom from 2003 to 2006. It features approximately 20 levels, including many secret and deathmatch-only levels. It is notable in that the focus is on exploring a vast and extremely non-linear world (most levels have at least 3 exits). While some new graphics and monsters were added, level designs are mainly E1-themed, but more detailed, expanded, and mixed with elements of natural caves and canyons. It makes use of ZDoom-specific features primarily for level structuring purposes (bridges and deep water are common), using advanced features such as custom monsters somewhat discretely.

The fact that it was built over the course of 3 and a half years by two different developers becomes somewhat obvious, especially in the later levels. The levels tend to become larger with more refined detailing as the player progresses through the game, and some of the level designs are very 'experimental' and differ greatly from the 'E1++' style of the rest of the game.

Crapi includes a railgun as a BFG replacement, implemented as a DEHACKED lump and re-using the BFG graphics. While this weapon appears very amateurish, it has been independently noted by several players that it makes for some great deathmatch dynamics, especially on MAP13 with fly mode.

The packaging and release suffered from several problems that led to horrendous reviews on Doomworld. Most notably, it was initially uploaded to idgames as a botched PWAD with no first level, leading many to believe that the authors were either newbies or pulling a fast one. Also, several players complained of the fact that it included the entirety of monsters.wad (a ZDoom community-built WAD featuring dozens of new monsters), even though only a few of the custom monsters were actually used.

The problem of the missing first level was corrected in a later release.