For more information on this article, visit the DB2 page on the Doom Wiki. 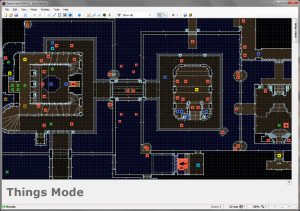 Doom Builder is a Doom level editor with full support for ZDoom editing, including the "Game-in-Hexen" and "Game-in-UDMF" map formats. It is being developed by Pascal vd Heiden (alias CodeImp) and is free software, licensed under the terms of the GNU General Public License. Popular features include lots of customizability, prefabs, advanced drawing code, and a 3D mode that lets you browse and edit your levels in real time.

The original Doom Builder was written mostly in Visual Basic. It can run on Windows 98, 2000, or XP, but not on newer versions of Windows (Vista, 7 and above). It can be used to create maps in the Doom and Hexen formats; but it is generally outdated and unsupported. It is able to parse DECORATE lumps to find custom actors, and also supports graphics defined in TEXTURES.

A fork of DB2 intended to update and maintain the DB2 workflow and interface without drastic changes.

An alternate version of the 3D visual mode, which was never completed. It shows 3D floors and slopes. It has been replaced by GZDoom Builder, which does not use it.

A fork of DB2 specialized on creating maps for

Doom64 EX. It cannot be used to edit maps in the formats supported by ZDoom.

Another fork of DB2 specialized on creating maps for ZDoom and GZDoom. It boasts enhanced support for ZDoom features such as showing slopes, 3D floors, and dynamic lights in visual mode, displaying models, and parsing MAPINFO, GLDEFS and MODELDEF lumps in addition to DECORATE to obtain the data it needs to give an accurate preview of the level in 3D mode.

A fork of GZDoom Builder mainly meant to keep the editor up-to-date with the latest GZDoom once the author of GZDB left the community.

A continuation and rebranding of GZDoom Builder-Bugfix that on top of having all the original GZDB features, includes a slew of new features such as ZScript support, visual attenuated lights and spotlights support, and Doom 64-style sector color support. UDB has a native 64-bit build with several performance optimizations, better Linux compatibility, and an improved OpenGL-based 3D mode.

UDB requires at least OpenGL 3.3 capability to run, whereas GZDB-BF, like other DB2 forks, rely on Direct3D.

Both versions of Doom Builder include a DECORATE parser used to obtain relevant information (such as editor number, Radius, Height, Scale, and so on) from custom actors. Additional information can be conveyed with keys in the form of special comments inserted within an actor's declaration block. GZDB and GZDB-BF also include parsers for MAPINFO and ZScript, and editor keys can be read if they are in an actor's Default block.