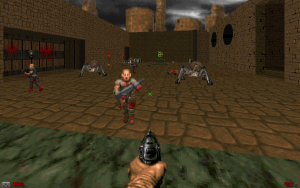 A part of MAP16 of Enjay ZDoom. Note the rapid fire trooper.

Originally starting as "Come Out Fighting", one of the first Episodes (if not THE first) made for Doom by a user, this wad was developed into Enjay Doom, then adapted and expanded into Enjay Doom 2 and eventually updated, cleaned up a little and expanded again to finally be Enjay ZDoom 2001.

Enjay has spent plenty of time on these levels, and the end result is a map set comparable to Doom or Doom2 in terms of gameplay, but with a slightly better look, and a lot of features to go with, including smashing glass (very fun for vandals), slopes, coloured lighting, blood that is dripped onto the floor by shot enemies and a lot more besides. One of the secret levels may well ring a bell to those who have played Quake.

The DeHackEd patch included also creates one or two new monsters, and combined with the extra sounds and resources, this could conceivably have been Doom 3 before id decided they wanted to make one. Probably one of the most classic WADs available for ZDoom, though some may find it a bit easy due to this, at least at the start.