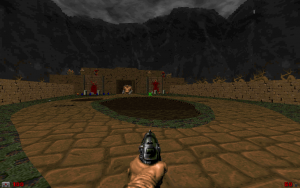 Central room to the facility, and its raining.

First, there was the BGun (a sort of rapid fire rifle), presented to the forums by Enjay as his sons work. However, Enjay wasn't going to let his son merely make a weapon - so consequently, after a bit of tuition, chevrolet103 also made a map. This map uses many ZDoom features, and has the option to turn off the BGun and replace it with the chaingun (although it's been noted by many that the BGun is actually better than the chaingun).

You can expect to be rained on when you go between the two halves (New and Old) of the facility in your quest for the blue key which will let you win the level. Likewise you can expect to come under fire, a lot. The map is quite difficult, but balanced well enough.