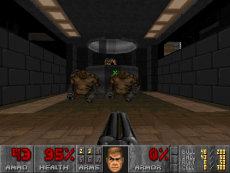 Meeting the points on the checklist.

The 5th entry in the Quicky# series of maps was made entirely based on the "I'm Still Bored" section on page 2 of the 2010 Cacowards, which reads as follows:

destroy some big computer and

Post your maps in the Cacowards thread. Deadline is Jan 1, 2010.

As the only entry to this randomly generated challenge, it is quite a small, relatively simple map. The "kill three Arch-Viles" part is notable for packing quite a punch on all difficulties however, and the additional areas created to weave the points on the checklist together make for another map of the expected standard.

More info can be found on Phobus' webpage for Small Dark Twisted Computer Lab, linked below.