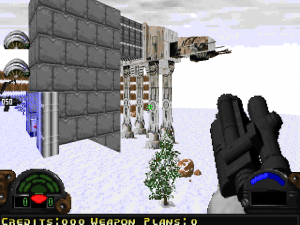 The Galactic Empire has taken an interest in this cold world you call home. They destroyed your repair shop, and now you want vengeance. Aid the Rebellion by undertaking missions against the Empire.

Chibi Rebellion is a SD (Super Deformed) take on the Star Wars universe. Players will go through a hub of randomly selected maps, blasting enemies, solving simple puzzles, and otherwise having fun. Chibi Rebellion falls somewhere between Lego Star Wars and Yoda Stories, so if you didn't like either one of those, you probably won't enjoy this. There is no gore in Chibi Rebellion, enemies typically leave behind a bouncing helmet to signify their passing.

Fusion Cutter
A simple melee weapon. Also used to repair damaged generators. To fix them, approach and 'USE' the smoking panel. Hit the indicators in time to facilitate repairs.
Scout Blaster
Your starting blaster, not very powerful.
SE-14c
A heavier pistol. Fires three round bursts with each trigger pull. Requires two weapon plans to build at the Chibi armory.
A-280 Blaster Rifle
Common Rebel Alliance weapon. Slower rate of fire then the E-11, with half as many shots per clip. Available from the beginning though. Picking up an E-11 will replace the A-280.
E-11 Blaster Rifle
Standard Imperial weapon. Can only fire limited shots before the power cell needs to be changed (automatic).
Scattershot Blaster
Shotgun class weapon. Useless at long range, but devastating up close. It's high damage yield requires frequent replacement of the weapons tiabana gas cartridges. A prototype design, can only be acquired by collecting four sets of weapon plans and building it at the Chibi Armory.
Light Repeating Blaster
Rapid fire weapon. Sustained fire will increase it's inaccuracy, requiring a cooldown to restore full functionality.
Dawnsorrow
A sniper rifle class weapon. AltFire on the Dawnsorrow toggles the weapon's shouldered mode. When fired from the hip, shots are innaccurate. Shouldering the weapon allows for precise shots with a zoomed view. Each shot generates substantial amounts of heat, but doesn't affect accuracy like the LRB. Should the weapon overheat, the firing chamber will be exposed until the weapon cools, rendering the player defenseless for a time. The Dawnsorrow bolts have a much lower travel time then other blasters, does slightly more damage then a rifle, and uses Light Blaster cells. Given it's anti-personnel status, the Dawnsorrow is ineffectual against droids and armor. Requires four sets of weapon plans to build at the Chibi Armory.
Range Finder
Calls in an airstrike by Rebel Air Speeders.

Fists
Only available when all your weapons are taken away.
Bash
Most weapons have a bash tertiary attack. Simply tap AltFire to bash objects.
Thermal Detonator
Hold AltFire on most weapons to toss a thermal grenade. The grenade will not detonate on impact.

Extra ammo can be purchased at the Chibi Base Armory by 'USE'ing the counter in front of the supply officer at the rear of the base. Primary fire will purchase the ammo. If you're low on light blaster ammo, the supply officer will give you a little ammo free of charge. New weapons can also be built at the armory using Weapon plans. Select the weapon you wish to build from the holo projector next to the supply counter, then 'USE' the workbench to it's right to build your desired weapon.

Shields will absorb most, but not all, of incoming attacks. Some attacks bypass shields all together. Shields can be restored by approaching Shield Converters, or picking up a Shield Generator, StormTrooper Helmets, or Shield Batteries. StormTrooper helmets only increase your shields by 5, but can exceed the 100 point limit.

Certain maps require the destruction of specific enemies/objects to continue. This prerequisite is indicated on screen by a status bar at the top of the screen, or generator icons on the right.

Lambda shuttles can often be approached, transporting you to a new location. Some may require a navigation card to operate, unique to each shuttle.

Speeder bikes may be approached to transport you to the Rebel base. From there you receive your mission, heal, buy weapons & ammo, and other functions.

Upon completion of a mission, continue playing to begin a new episode, retaining your weapons. Meeting certain requirements in an episode may unlock special features for the next episode.