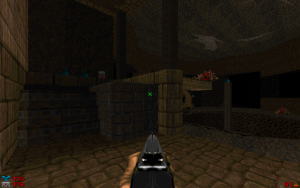 FuzzballFox came up the idea of making a short community map project working within not one, but two limits. The first limit is the one that gave the wad a title. Every map was limited to having only 10 textures/flats for use in the level. Likewise, maps were limited to a 2048x2048 play area, though as with the 1024 projects, architecture and the like was fine outside of that area, as long as the player couldn't get there.

The plan was to have a 15 map single player episode (with MAP21 being a secret map), and also to make a 5 map co-op episode for up to 4 players (Starting MAP16). Half-way through the project Fuzzball was no longer able to lead the project, so §-Morpheus-§ took over as leader and compiler for the project. Maps range from intricate, tight designs to simple layouts, and gameplay styles change frequently (with the secret map being a mini-game). There is a small bug in the MAPINFO where going from MAP05 to MAP06 will bring up the end message for the single player episode. Aside from 21 maps and a TITLEMAP, the pk3 features new graphics, a pallette and various other extra lumps.

A key feature of the project was the large number of relatively unknown and new mappers at the time who volunteered and contributed to the project. A downside of this is that it garnered little attention when it was released and was largely dismissed.

Contributors to the project were: