The Community is falling 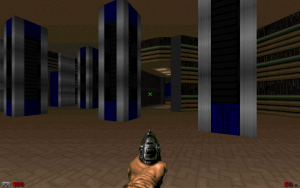 The first in the CIF series of jokewads, and the 6th in Kaiser's final series of entries to the Doom community, cif.wad places you in the boots of the hacker. A malicious geek who has nothing better to do with his time than hack the computers of others. Following a similar vein to the Doomworld Forums series of wads, and indeed using parts of the level structure from dwforums1.wad and its direct sequel, the hacker soon finds Kaiser's computer a bit more well guarded than he first thought, and swiftly finds himself coming under Kaiser's employ in order to save Newdoom.com and doomworld.com from the n00bs from Quake3world.com. Of course, being the hacker you eventually destroy everything after you've saved the communities.

Something of an in-joke for the most part, people not familiar with either community may not get the jokes entirely. However, it is highly rated and has two sequels, plus the chance to blow away MSPaint drawn n00bs in order to see their dying ":(" seems worthwhile every time.