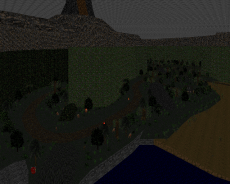 Picture showing the starting area of The Island

The Island is a large open map created by Jason Farlow that loosely attempts to recreate FarCry in Doom. It utilizes many of ZDoom's features extensively, including slopes, deep water, and objectives. It also features monsters from the Monster Resource Wad. You start out at the beach of an island and must fight your way through it and a base, completing a few objectives along the way. There is also a somewhat difficult boss battle at the end of the map.

Some of the areas are very large and you may run into some lag.

It had a sequel called The Island 2.

While most thought The Island was a great concept, many criticised it for having ugly texture usage and monster placement. One of the main problems many people had with The Island was the sheer size of the map. Many Doomers had lag issues because of this and were unable to play properly. Because of this, people say it is the first WAD to have system requirements. Fans of the wad enjoyed the huge jungle like open areas, nice interior areas and a variety of monsters.