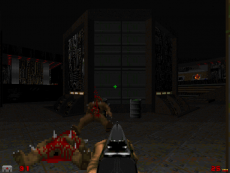 Inside an underground UAC complex

Titan, released in late 2004, is a level set on Titan, one of Saturn's moons, consisting of 9 single player/cooperative levels for Doom 2. Some ZDoom features such as colored lighting, slopes and submersible water are used, as is scripting. The levels are mostly linear, with the player starting out at a mineral storage facility and eventually making his way into the planet's core, which somehow turns out to be a way into Hell. The gameplay is run n' gun, with plenty of monsters to fight, especially in the later levels. A few new monsters are also present. The early levels of Titan may seem a bit amateurish, but the WAD improves noticeably as you progress through the levels. Highlights include various traps, a tricky cyberdemon battle and the final level.