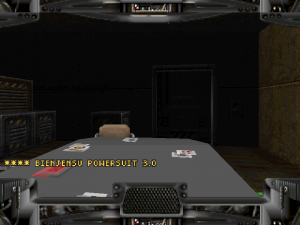 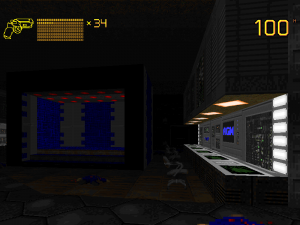 Barista is a strange experimental mod created by Brendon Chung. The Barista series has four episodes in total, the first for ZDoom but the "sequels" are for

Half-Life 2 respectively, with no narrative link between them nor any reason why the title is "Barista" besides a few odd lines in Barista 2.

Barista is inspired by the

Half-Life. It uses resources derived from Freedoom and various other sources, enough to replace everything needed by the single map and therefore work as a stand-alone.

The level is short and slow-paced, with little action, aiming instead to create an oppressive ambiance where you are alone in a deserted complex.

Tei Tenga is here the name of the invaded Phobos station, and you start by equipping your helmet and exploring the level a bit before finding your first weapon just in time to fight the first monsters. Your progress in the level is monitored by a mysterious ally going by the name of

Polypheme, with who you can only communicate through computer terminals where the messages are generally garbled. 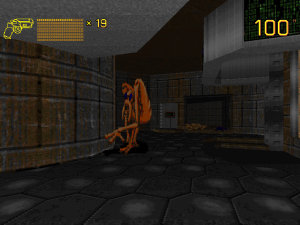 The other monsters look worse.

The arsenal is limited to a pistol and a shotgun. Both can be dual-wielded: finding a second pistol gives the equivalent of the chaingun, while finding a second shotgun gives the equivalent of the super shotgun. There are no fist, berserk or chainsaw equivalent, so it is important not to waste all ammunition trying to take down the cacodemon replacements, as they are utterly invulnerable. The others are easily enough dispatched with the few weapons available.

While the ambience is well-crafted and makes a good use of ACS, it suffers from the monster replacements, which look goofy, cartoony and rather out of place, especially the red and blue monsters.