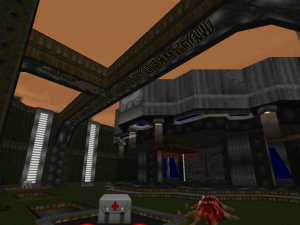 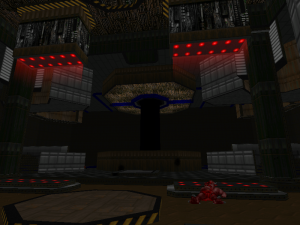 Technophobia Overdose is Remmirath's first solo mod (earlier works were contributions to team-based mods, such as the Ten Community Project. As such, it was also developed as a way to learn many tricks of ZDoom modding, which can be apparent in the way some features are used, in a single area, seemingly just so as to be used, rather than because they would logically fit in the level. The level architecture also suffers a bit from this "completed tutorial" effect, featuring sometimes gratuitous detailing that does not make much sense. The custom monsters, however, are used correctly; better employed in fact than some of the stock monsters.

Technophobia Overdose presents you with a vast "techbase" complex where you will have to find all three keycards, recover a five-digit passcode, start secondary generators, and disengage the master lock just so as to escape from it. The gameplay is relatively easy and rather linear, with however a few high points. Overall, Technophobia is good source of inspiration and examples for mapping techniques, but the gameplay itself is rather average. If taken as a playable tech demo, it is a rather enjoyable creation; and it is certainly a good way to quickly survey and experiment a few of the features available in ZDoom mapping. 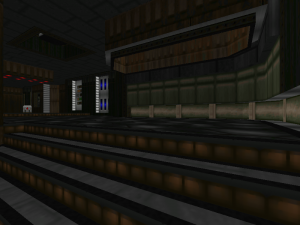