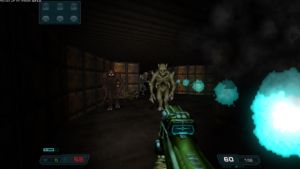 A screenshot from Xim's GZDoom3.

A gameplay mod for GZDoom which replaces the classic Doom weapons and enemies into their Doom 3 counterparts, with adjustments made and additional extras included. This mod contains new graphics made by various community members and sound effects from Doom 3. The weapons and enemies can be run together or separately, but are recommend to be run together for the best intended experience. Requires GZDoom ver.4.5.0 or up and a valid doom wad.

This mod aims to mix the gameplay of classic Doom with the semi-real themes from Doom 3. Here is a list of some of the features

Also included is a 'world' patch that turns maps into a Doom 3 style, includes DarkDoomZ and D3RetroTex, along with liquid effects and Doom 3 sounds.