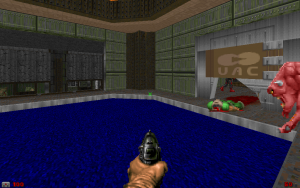 Attention to detail pays off here in the Satan Complex.

The sequel to Sin City, this wad makes use of an in-game story, as well as new textures, sounds and music. The start of the map is a fairly long, unskippable cutscene, but after this you are thrown into objective based gameplay around a well detailed environment, battling monsters in a similar fashion to the prequel, just with more obvious ZDoom effects. Unlike the Quake-style environment from before, you instead have a largely TEKGREEN and metal techbase to explore and conquer, unlocking the story and eventually blowing up a chunk of the level.

Praised for its effects and gameplay, this wad is still sometimes considered to be weaker than the other two.