A World in Strife: Raiding the Dam 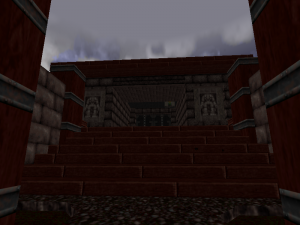 Can you guess what awaits atop these steps? 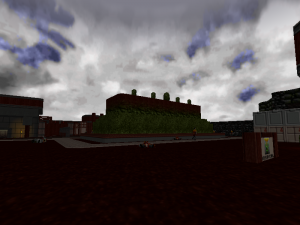 Raiding the Dam is a single map for Strife, the first in a series called A World in Strife. The author did not intend for the map to be exclusively for ZDoom, however it was the only port filling all the requirements during development. The mod might become compatible with Doomsday, Eternity Engine or Vavoom in the future if they acquire support for Strife or fix support of

voodoo doll tricks. Because of this, the mod does not use ZDoom-specific features, not even a MAPINFO lump. It also makes little use of Strife-specific features, such as custom dialog scripts or breakable screens. A few beggars and peasants with nothing interesting to say, and a few merchants to replenish ammo, armor or medical supplies. However, it makes use of a feature forgotten by the original game, the ability to dynamically change music when crossing certain linedefs. The mod features its own custom soundtrack, also written by Khorus, in MP3 format; a high-quality version is even available to listening to out of game. 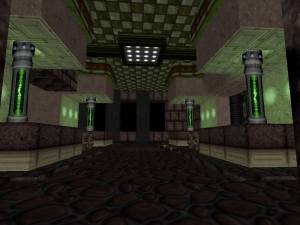 The end is nigh.

Raiding the Dam is a single map (plus a "game over" map given the lack of MAPINFO), but a huge one. The dam is a large and heavily-defended complex, split into several smaller areas which have to be explored quite linearly to obtain the access key to the next. Starting in caverns, the mercenary progresses through industrial installations and military bunkers before reaching a small village and, beyond, an alien temple where the Programmer waits.

All weapons except the Sigil can be obtained before the confrontation with the master of the dam; and there is enough ammo for stingy players to overcome all opposition without having to buy some from merchants, provided care is given to avoid missing the targets. The Strife hero's extreme lack of precision when holding fire can easily invalidate the previous statement, especially given the lack of accuracy upgrades throughout the map. Opposition is plentiful — mainly acolytes and sentinels at first, then all kinds of robots start appearing in ever greater number, including several mini-boss fights against the mighty inquisitors. The architecture is beautiful without being extremely detailed, and manages to give a sense of austere majesty to Strife's rather monotonous texture palette.

"Raiding the Dam" would be above average even if Strife mods were not so rare. Saving the game often is recommended given the sheer size of the map, and the high randomness of Strife combat. Once the Programmer is defeated, Strife's original scripted sequence teleports the player in a new map comprised of a platform with "THE END." written on it and what could be thought of as a mosh pit.