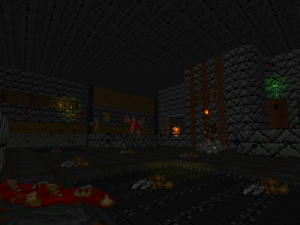 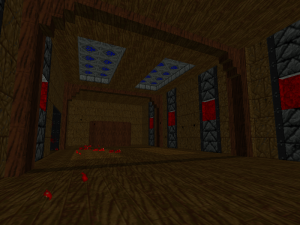 Old Memories 2 is a single-level map for Heretic taking the E3M4 slot. Like its predecessor, it is advertised as requiring ZDoom, but does not make use of ZDoom-specific features; not even a MAPINFO to let players access the map directly from the new game menu. There are again no scripts and no new content. The architecture is a bit more appealing than the previous map, though it is still mostly drab brown and gray walls.

Contrarily to its predecessor, the map starts quietly, but it gets populated very soon with a large amount monsters teleporting in or rushing out of closets to ambush the player when activating switches or grabbing keys. The main element of gameplay is the use of vertical space, separating the map into several levels connected by lifts or, more rarely, stairways; and the upper levels overlook the lower levels with windows through which monsters such as fire gargoyles, nitrogolems and undead warriors can snipe at a player busy dealing with a swarm of sabreclaws augmented by weredragons, ophidians and maybe a maulotaur or two.