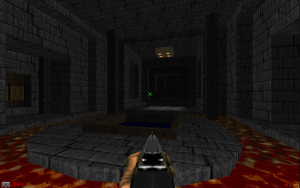 The starting room to Zort03, demonstrating the darker architecture.

Finished on 27th May, 1999, Zort03 was in development for roughly 3 weeks, and the added time shows, as the architecture in this more grey affair is improved greatly (with help from the GothicDM and GothicDM2 texture packs). Aside from a notable abscence of the cricket, this wad introduces another staple of the Zort series - Cyb talking to you. As soon as you start you are introduced to the map and the speech continues in places.

The map is similar in size to previous maps, although this one houses a fairly difficult final fighr involving a Cyberdemon (allegedly the author). As with all Zort maps it's primarily created for single player and plays on MAP01 of Doom2.

This also features music from Mark Klem, though apparantly he (Klem) doesn't know that, if the text file is to be believed.