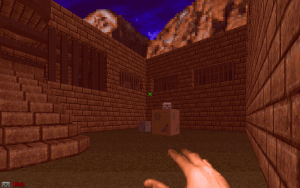 A courtyard just outside the start.

Completed (or at least uploaded) after Zort07 on the 22nd of December 1999, Zort06 is full of "the cheese quotes from the Doom comic" and plays quite well if you like using the berserk pack. This map is the swansong of the cricket in the Zort series, and also features other ambience and a new teleport sound. Another MIDI comes from Mark Klem, and graphics are aplenty in this offering (by NiGHTMARE and some edits by Cyb himself).

As usual, you are fighting through a small castle level (brown this time) which is based around the scripting. Unlike the more serious tone set by the Zort05 and later Zort wads, this one retains the fun and humour of the early wads.