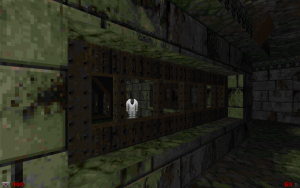 Green rock and a cutscene from Zort08.

Finished on 3rd December, 2002, 3 whole years after Zort07, this shows a much more accomplished Cyb, creating a darker atmosphere, using more advanced ZDoom features (an awful lot of colour translations on monsters, among other tricks) and generally making a better product. This time there is no new music, but there is ambience from Half-Life, Quake and Quake2, as well as another of ZSignal's skies.

The map follows the same principals of previous Zort wads, but if it had been released under a different name many would probably not have noticed, as the style and timespan have produced changes that are quite notable. It is still quite tough however.