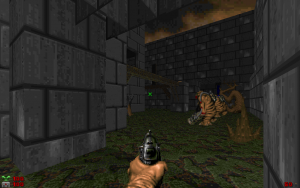 Back to castles, this one uses some fake 3D architecture to great effect.

Back to the home territory of castles, Zort05 made its debut on the 2nd August, 1999 (considering that Cyb was also making various other non-ZDoom wad series, this is quite an acheivement in itself). Making use of jumping, some helpful shortcuts and the usual scripting and gameplay style. The cricket makes its triumphant return, as does the authors commentary. The new graphics this time are largely limited to SUPPORT3 style supports (used for the 3D effects). Difficulty is particularly high, and the use of stealth monsters turned some off of the gameplay.

Music is again by Mark Klem. The map itself is still fairly short and simple, with a lot of emphasis on ZDoom features.